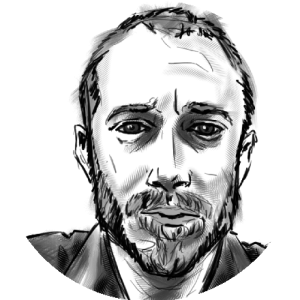 My daughter with enough mysticism
for us all, an obscene building
drifting up from this main street filled

with a mania no one will bother to name,
for naming might as well be a flood
of mirrors, a crack in the mind we’d rather

not concede. No point in paragraphing.
No point in boxes born from the mind’s
darkest points, although train tunnels

a simpler shade of black spill
from the mouth of most animals
(even in daylight), an odd form of money

but not a place to begin. For this we do not
pay a price. I do not know if it is the mind
that gives shape to the world.

In any house you can find all houses—
bricks contain more than
they weigh and more than they desire.
But what does a house desire? We cannot

know what a house will hold:
its beams bend, clawfoot tubs
walk down destroyed streets,
a wall along a stairwell leans across

as if to hold the other side. Emptying
houses contain objects as well
but moving one’s belongings into
a home might be a sort of violence,

though to assume a house desires
its emptiness is to assume the streets
desire they not be streets. The habits
of the past should not define the future.

Allow this space to be filled with something
more than light. What makes

you uniquely qualified for the temporality
of the unnamed?

idea, a butcher block
floating out to sea. The notion of halves

is another thing altogether,
though we must begin somewhere.

In logic there is only blue and then bluer, but these colors
are not a metaphor for anything

beyond the calm reach of the mind. In thinking
of how much will not come to light

or in thinking of the limits of what a bowl contains,
tell me about yourself, what your poems would be like

if you wrote poems.

nothing can be found. You had been told
it was inevitable. You think it’s midday

but there’s no way to know. A cookstove covered up
with snow. A tiny oak where your heart should be.

Adam Clay is the author of A Hotel Lobby at the Edge of the World (Milkweed Editions, 2012) and The Wash (Parlor Press, 2006). His third book of poems, Stranger, is forthcoming from Milkweed Editions in 2016. His poems have appeared in Ploughshares, Poetry Daily, Crab Orchard Review, Boston Review, Denver Quarterly, The Kenyon Review Online, Black Warrior Review, Iowa Review, The Pinch, and elsewhere. He co-edits TYPO Magazine and teaches at the University of Illinois Springfield.

This site uses Akismet to reduce spam. Learn how your comment data is processed.